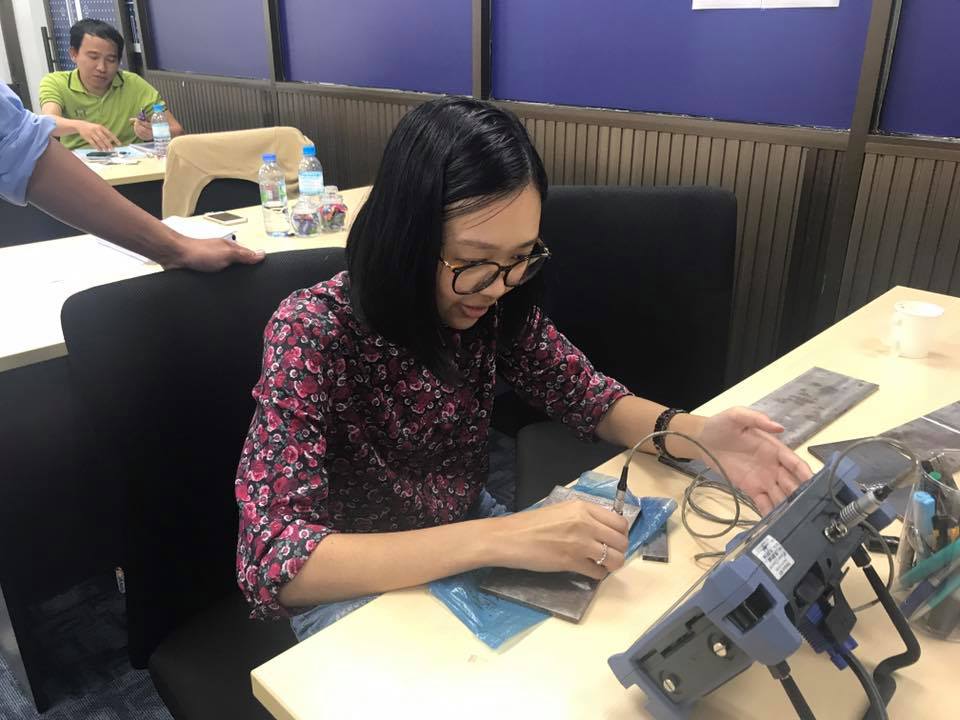 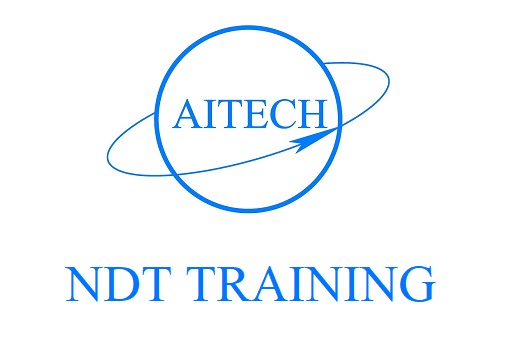 INTRODUCTION
Ultrasonic testing is a highly sensitive method used for critical applications where quality is very important. This method is used for detecting:
• Cracks
• Inclusions
• Laminations
• Other discontinuities in welds and various other materials. 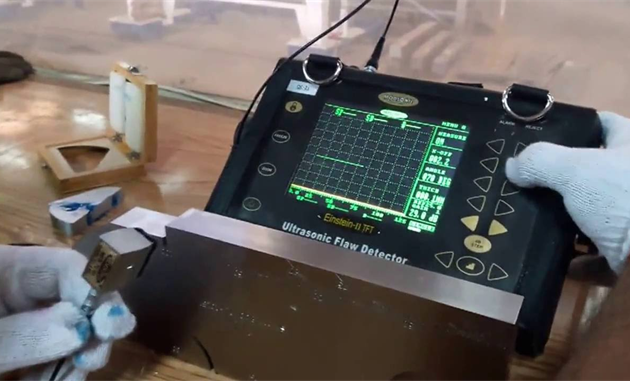 The inspection method is similar in principle to the sonar that military ships use to detect submarines. The ship’s sonar device transmits inaudible sound waves which reflect off the submarine and are received as signals on a screen.

Ultrasonic testing is performed in a similar manner. A device called a transducer is coupled with the part. It provides mechanical sound waves that are transmitted into the weld or base metal to detect flaws.

Transducers are made in a limitless variety of sizes and shapes. There are two common wave types, the straight beam and the angle beam. The test surface determines which transducer to use. The angle beam is used where the reinforcement would interfere. The angle beam can be placed to one side of the weld. It produces no back reflection. It is important in detecting discontinuities and flaws in pipe and tubing welds. 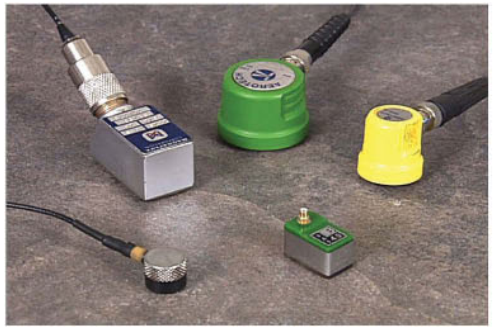 Picture 4. Some transducers use in UT.

Couplants eliminate the air gap between the transducer and the specimen. A variety of liquids or pastes are used to insure proper transmission of the sound waves. 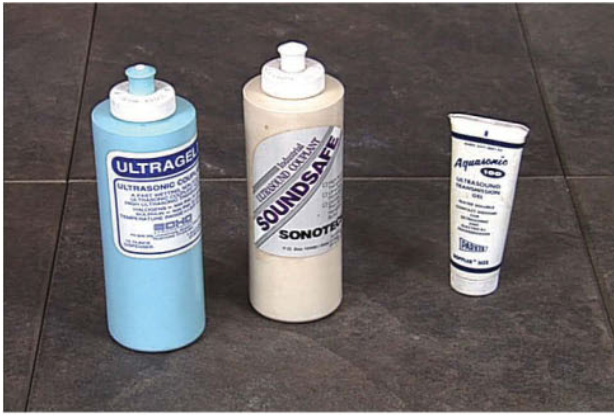 Sound waves travel into the specimen and, if interrupted or reflected, the transducer will receive an echo. The signal is sent to the ultrasonic unit where it is amplified and displayed on a screen.

While the display screens of early ultrasonic units used a cathode ray tube or CRT, more modern display screens are liquid crystal display or LCD. The display consists of a straight base line. When sound waves are interrupted, a break will appear on this base line. These breaks are referred to as vertical pips. An inspector interprets these pips to determine flaw depth and location. 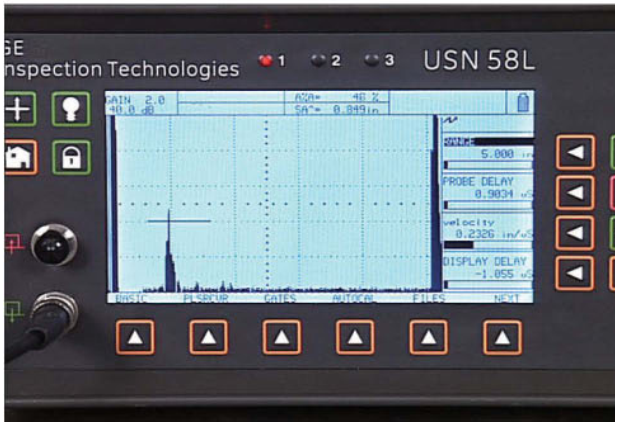 The flaw depth and location can be displayed by any pip signals that appear between the initial pulse and back reflection. When a transducer is moved across a block with a pre-drilled hole at three inches in depth, all pips will appear at the three-inch mark on the scale.

The amplitude or height of the pip will give some indication of the size of the flaw. The higher the pip, the larger the reflected area of the flaw. 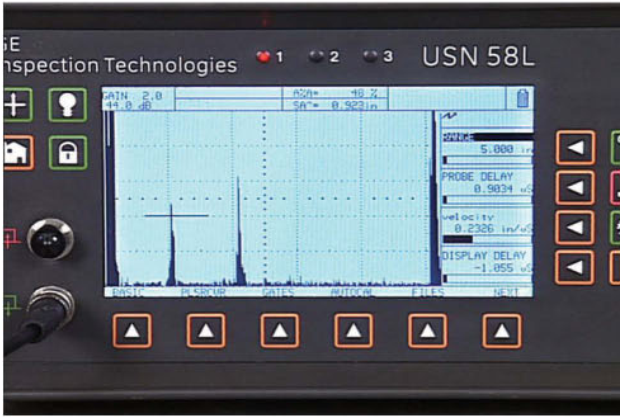 Picture 8. Signal of the discontinuous render in screen.

When compared with other nondestructive testing methods, some of its most outstanding features are accurately determining flaws, depths and location; it can be used on practically all nonporous metals or materials; and battery operated equipment makes it ideal for field applications.

The ultrasonic method of inspection requires a highly trained and skilled operator and it is difficult to contact test complex configurations and rough surfaces.

Equipment must be carefully calibrated prior to use. Calibration is normally done by using a standard reference block. 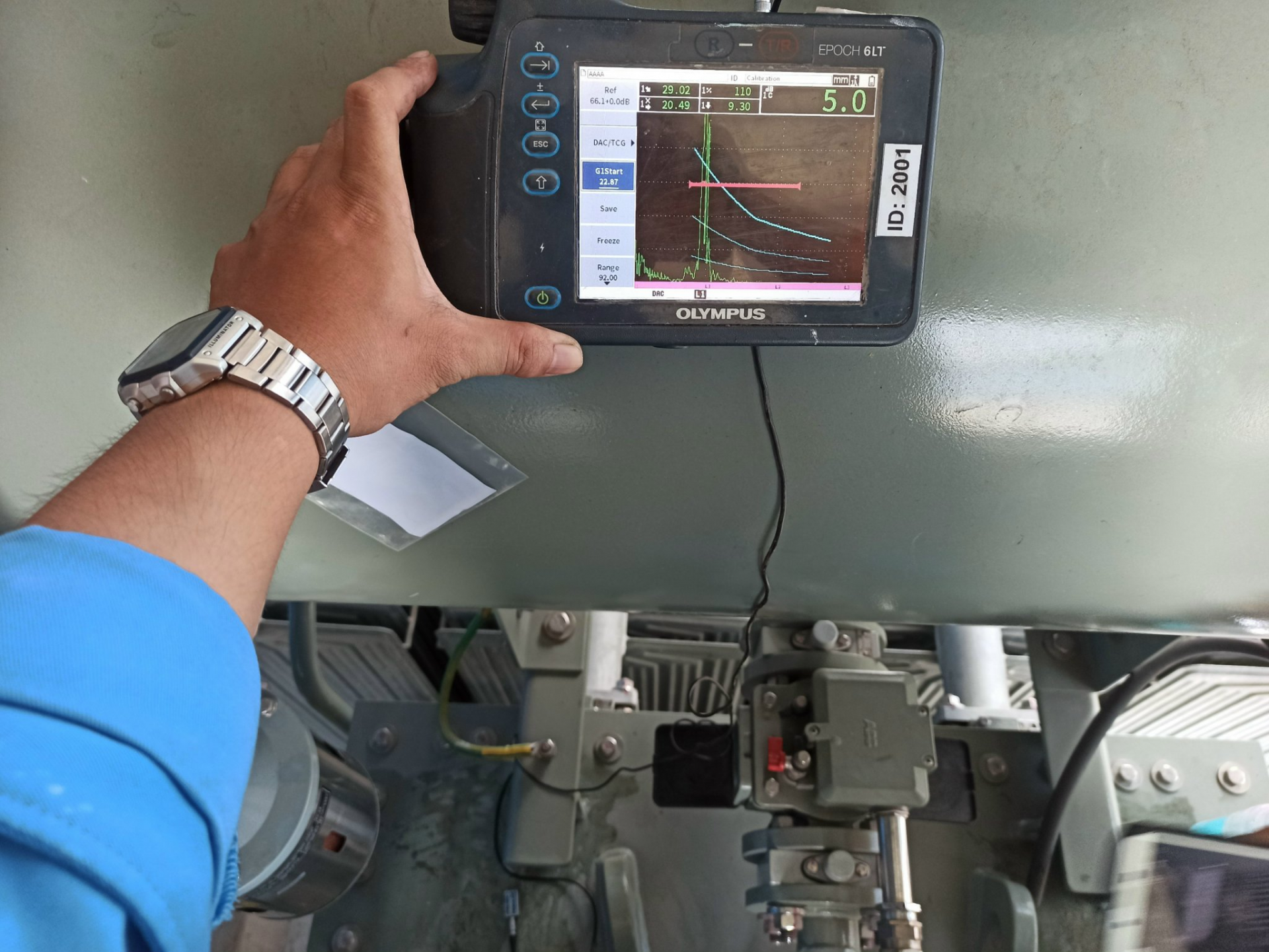 Immersion testing is another variation similar to the contact method. It is used quite often in testing of larger components. This test is conducted with both the transducer and component submerged in water. The water acts as a couplant allowing the signals to be transmitted into the part.

The aircraft industry uses this method for testing irregular or complex-shaped components. 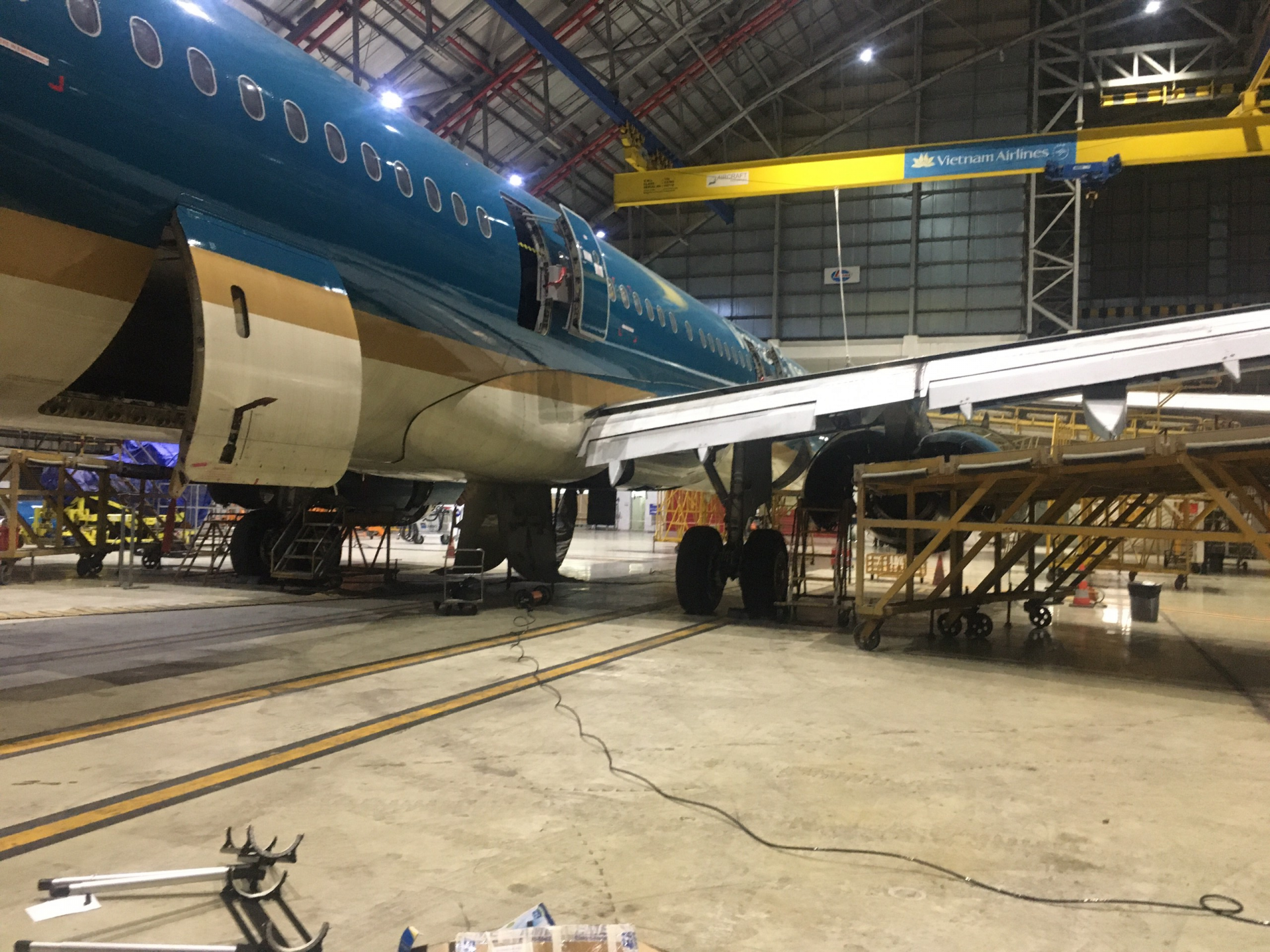 Ultrasonic testing can be a very valuable tool for inspection of weldments provided the proper equipment is used, personnel are well-trained, and properly written tests are used. 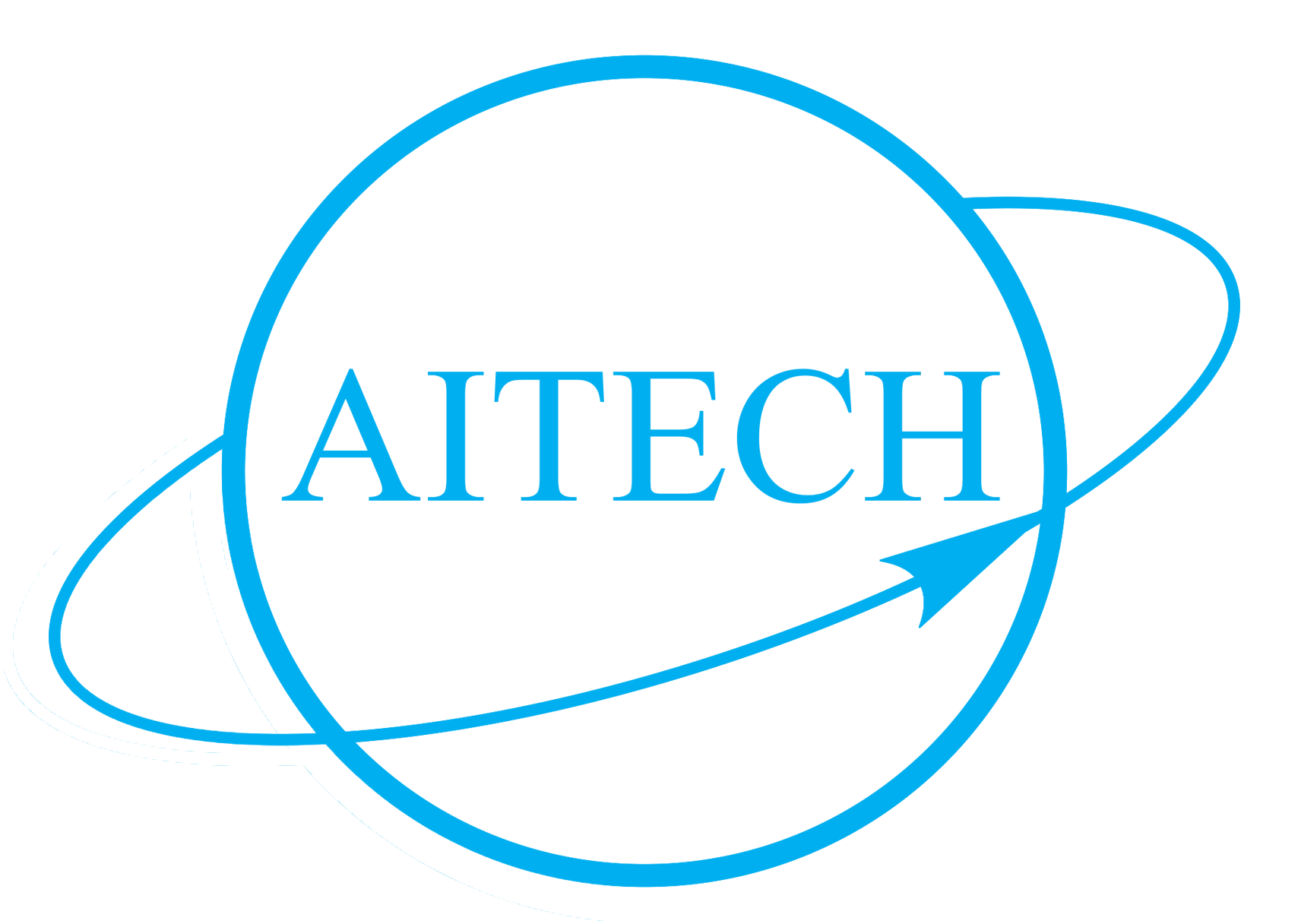 THE RELIABILITY OF NON-DESTRUCTIVE TESTING